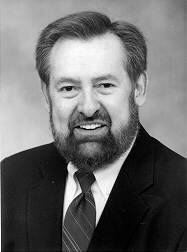 His early research, stemming from his doctoral work, involved experimental studies of the persuasion and attitude change process. Much of his work centered on message variables, particularly evidence, in persuasion. The work in this area for which he is best known is that on ethos and source credibility, the first article on this topic being published in 1966 and the latest was published in Communication Monographs in 1999.

Another of his research programs has dealt with communication apprehension and related constructs such as willingness to communicate, shyness, talkaholism, and communication competence. His first work in this area, a study of the use of systematic desensitization for reducing public speaking anxiety, was presented at the Speech Association of America Convention in 1968 and his most recent books in this area, one focusing on communication avoidance and the other on trait perspectives of the communication process, were released in 1997, 1998, and 2001.

Another of his research programs which has made a substantial impact in this field, as well as other unrelated fields, has been his work on the role of communication in instruction. In conjunction with his colleagues and his students, McCroskey's work on classroom management, immediacy, affinity-seeking, caring, and other topics related to communication and affective learning have provided a whole new perspective on instruction, one that has received numerous awards not only from the communication field but also from such disparate fields as pharmacy and teacher education.

McCroskey is probably best recognized for his prolific scholarship. He has published over 220 articles and book chapters and over 50 books and revisions, as well as over 30 instructionally related books. His first book, An Introduction to Rhetorical Communication originally published by Prentice-Hall in 1968, is now one of the oldest continuously published books in the field. The ninth edition was published by Allyn and Bacon in 2006.

While best known nationally for his scholarship, McCroskey does not sacrifice his teaching in the name of research. For 25 years, although serving as department chair and continuing an active research effort, he (on-average) taught seven classes per year. After stepping down from the chair position at West Virginia University, he taught 12-14 classes each year. He received West Virginia University's Outstanding Teacher award. In 2003 he received the Mentor Award from the National Communication Association.